I'm from a small Ohio town, one with a seemingly rich baseball history, and since the recent release of the movie 42 in theaters, I've found myself wanting to find out more. I've always know that Branch Rickey, best known for breaking Major League Baseball's color barrier by signing Jackie Robinson, was a local to the area. Former Major League Baseball player Al Oliver, former professional baseball umpire Terry Craft, and former longtime Cincinnati Reds scout Gene Bennett are also locals. In fact, we just passed Mr. Bennett the other day while driving and he was still wearing a Cincinnati Red ball cap. What I didn't know was that Al Bridwell, Larry Hisle, Gene Tenace, and Rocky Nelson also have ties to the area and let's not forget about Josh Newman.

Anyway, my 13-year-old son is a huge baseball fan and since yesterday evening was so nice, we took a little drive to visit Branch Rickey's grave. The cemetery was much bigger than we initially thought and we had no idea where to start and we didn't think we'd be able to find it at first but then my step daughter got out her cell phone, pulled up a picture of the grave on the internet, and in the background we could see a white house (which ended up being a church) but that gave us an idea where it was and we found it in no time at all. It's funny because Terry at My Journey With Candida recently wrote a blog post about cell phones and I left a comment saying that they've been handy to have at times and this was definitely one of those situations. If I would have thought, I could have let my son take a flower to put on the grave but I just wasn't thinking. I was surprised to see that the only flowers there were a single wilted dandelion on top of the tombstone, a small faded set of artificial flowers stuck in the ground in front of it, and another small bouquet of flowers lying on the ground that have long since died. 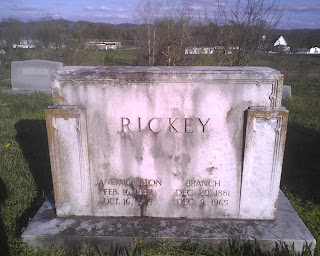